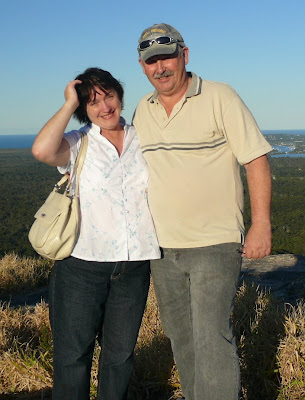 They look so happy here...taken about 6 months before his death. he would be almost 51 today...

This is my younger sister and her husband. Today 30th April is their Wedding Anniversary.

Today the man who killed Bruce on the highway last March was sentenced to four years jail.

Today Joan gave a victim's impact statement which the police said made the sentence six months longer. I heard that statement read through many tears as she wrote and rewrote it - how do you out it all in a few minutes...an impact like that?

It wasn't just an accident and was clearly intentional - there were so many witnesses as he was the bus driver and the bulk of the passengers saw the 4Wdrive coming at them on the wrong side of the road for some way...no booze, no drugs, no explanation that makes sense. By pleading guilty he avoided facing all those witnesses.

If he hopefully keeps his head down and serves his time - plenty of time to think - he may come to appreciate what he has caused. That is the best outcome. its never about revenge..although at first you want to rip someone's head off...hopefully he will come out and do something worthwhile with his life t make up for the dreadful suffering he has caused.

hen my sister told me the court was to be held on the wedding anniversary I was sad for her...but now in her and their daughter's own way they can breathe again and perhaps celebrate with Bruce behind them all the way.

So Happy anniversary Joan and Bruce.

The court system in this country sucks. Glad she was able to give a victim impact statement and amazing it added to the sentence! I gave one for my brother and it helped so, so much in my grieving process.

How sad.....just really sad and unnecessary.

Life can be very hard. blessing on your little sister.

I'm sorry for you sister's tragic loss, and glad that part is behind her.

The mind boggles that this man can be out of jail November 2011 - Joan and Alanah will suffer for a much longer time.

JOAN Kent should have been celebrating her wedding anniversary with her husband, Bruce, yesterday.

Instead, she stood in front of a crowded courtroom and the man who killed her husband of 27 years and tearfully told how the accident had broken her heart and family.

Mr Kent, 50, died on March 4 last year when a four-wheel drive slammed into the bus he was driving on Nambour Connection Road at Kulangoor.

The Sunbus driver of 16 years died a hero, swerving to minimise the impact on his passengers and taking the direct impact of the crash.

The driver of the other vehicle, 27, was sentenced to four years in jail for dangerous operation of a motor vehicle causing death and grievous bodily harm.

The Maroochydore District Court was told that the man 27, had smoked cannabis the night before and had consumed amphetamines and alcohol on the previous weekend.

The court heard that Mr McI****a pensioner who had been working “for free” for Valdora Earthmoving, was picking up a part when the accident happened.

Witnesses saw the car swerving before the accident but police found no indication that it had tried to stop.

Although Mr McI**** suffered life-threatening injuries, he pleaded for help to get out of his mangled vehicle after the accident “before the cops get here”.

He later told police that he could not recall the accident and told the court that he had probably “nodded off.”

Nine bus passengers were treated at the accident scene.

The court heard that Mr McI**** was caught speeding twice after the accident.

Judge John Robertson acknowledged that the levels of chemical substances found in Mr McIntosh's bloodstream were not enough to have caused the accident but were probably a contributing factor.

Mr McI****, who the court heard had an anti-social personality disorder, showed no emotion yesterday as Mrs Kent read an emotional victim impact statement to the court. Mrs Kent said outside the court that she decided to speak in court to honour her husband.

“He gave his life to his bus passengers...” she said.

Mr McI**** will be eligible for parole in November next year after serving a third of his sentence.

He was banned from holding a driver's licence for four years after his release."
Witnesses reported seeing him driving on the wrong side of the road for about a kilometre before the crash. I purposly left his whole name out because although its been published far and wide by now, these days who knows...

4 years is nothing compared to what your sister has/is going through.

Anne - but as I said to her when we spoke on the phone this morning - "Today you get to go out in the sunshine and choose what to do and how to spend your day...he (the driver) will wake up this morning the second morning in prison and unless he is dead thick it will hit him hard every morning till he is released. If he doesn't reflect on the outcome his actions while in prison then he is not worth the rest of your life thinking about him."

It wasn't just an accident and there is the tragedy - he is a ratbag.

Don't we have 'vehicular manslaughter' in this country? That's what I would have charged this idiot with.