As above... so below
I was 41 when I wrote this 14 years ago as the introduction to a collection of short stories based around my family...after I wrote this mum died, Don was sick for a long time and once again down in that filthy RNSH...shortly later his mum and sister died etc etc...it became too painful to continue...but the stories are there for the girls as a colourful history of our family warts and all... Things were so different then but I feel the same about many things...
Intro for "Roaring with delight"
"People say that, "Time Heals All". I don't believe this. Time doesn't do anything at all, we do. The passing of time may knock all the raw edges off, that's all. We are like planetary bodies passing through a vast asteroid belt.

The new planetoid approaching this belt is smooth and spherical. It sails serenely through the blackness. It dreams a thoughtless dream as it rolls along in its absolute innocence and total ignorance. Seeming perfect. As it approaches the asteroid belt,
it wakes up slowly to the dangers. In its mind it calls to its parent Sun for help, but in its young gameness it has already wandered too far away, for the parental gravity to call it back. The little sparsely scattered rocks of the asteroid begin to chip
away at its pure surface. Its surface becomes pock-marked, and its regular rolling, less regular.

Well into the asteroid belt, the larger rocks begin to explode onto its surface, and cracks form. From some of the cracks light emerges. From others, crawl all manner of darkness. The balance is being struck. Its atmosphere is filled with the dust of its
sorrow, and it begins to lurch and roll dangerously, trying to consciously steer a course towards a space between the rocks. The old and battered planet carries its baggage like a 'Bag Lady' ploughing her way up a crowded city street, head down and
avoiding all eyes.

As the planet wobbles its way through the enormous belt, the asteroids become fewer and smaller. It hardly notices the millions of little collisions that occur through the millennia of its travels. The knocks become less hurtful and the planet begins
to forget the suffering and begins to dream again, this time without innocence and without ignorance. It laughs and rumbles with mirth at many centuries of life in the belt.

Now the vastness of space can be seen again, becoming rich with mystery. Peace and wisdom grow in the planet and it begins to roll evenly again, but now with a difference. Now it is the most beautiful planet imaginable. It carries a halo of
light-reflecting particles, tossed up around it by all the impacts. Those last small rocks which besieged the planet, sculptured it and it is now spherical again, after all this time. It gives out its own light now, and appears like an angel in the dreams of young planetoids waiting to be born.

Life is like this, I believe. Some people never pass through the asteroid belt. It seems to others that they are the lucky ones but I'm not so sure in the long run, although it must be nice to reach the end of life without losing innocence. Some people see
the asteroid belt coming and make adjustments to avoid it, weaving and dodging, only to be fall into an unseen black hole and get sucked into a long string of nothingness. Others refuse to begin rolling and remain innocent and ignorant, impersonating perfection. Whether it takes all sorts to make a world or not, the majority of us end up in the asteroid belt, being sculptured by our sorrows and joys, savouring empty spaces we call peace. 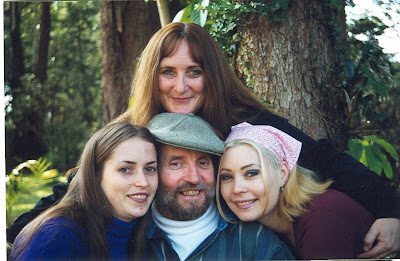 (These photos were taken about five years after I wrote this - but it was such a silly day itworks for me in here)
I'm right in the middle of the asteroid belt now, and I pray that
none of the rocks that smash into me will be too big to handle.
The title of my story " Roaring With Delight", describes how I
feel inside much of the time. Life is really funny, along with all the unbelievable sorrow and suffering, the world is a very funny place. Often I am aware of the 'roaring' feel of life. Its like being on a huge water slide unable to control your descent, but most of all I feel like that planet, plunging through aeons of collisions in the crowded spaces in the asteroid belt, having breathers in the stillness o 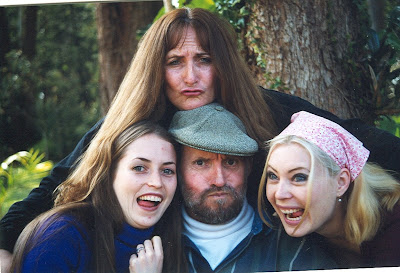 f the spaces in between.

At forty one, and at this moment today, I feel good about the
life I am about to describe. I would like to make it right
through the asteroid belt, so I too can roll smoothly, trailing
my halo. Ha! I also hope that this emergence from the turbulence
doesn't happen for at least another forty years. I am much too rough headed yet to roll smoothly, and I quite like it here
amongst the other rough headed ones. I keep telling God this and hope it carries weight.

There is a big drawback in writing your own story, when most people you know are still alive, and may choose to be hurt. I would most certainly be hurt myself if I were to be presenting a totally graphic account. The best bits often have to be left out.
The things you got away with unscathed, have to be put on hold, to protect the guilty, and some of us could be pretty guilty of minor anarchy, in the public interest, of course. I might just have to put in a sealed section called 'Naughty Bits'. Next time
perhaps, when I am eighty.
Posted by Middle Child at 2:25 pm

I know I have a similar concern about my own writing at the moment, writing my own story for my boys. there IS stuff there that's... umm... hard to write about, but they do need to know about it al the same. I know I'm gonna wait until they're much older before i give them each their own copy too.

you are an amazing soul you know....truly.

Your intro reminds of how a pearl is polished by the sand in the oyster. Adversity makes us stronger and pulls us closer to those we love. Great pics.

Mla..just begger them all thats my attitude these days. I just spreadi it aboutn that I had a hidden c'clustrr map: and couldn see when thise "low enough" to invade my privacy visites...hm one sister and creepy huisband have gone very quiet...weak mongrels... the other one and her deadshit of a husband would be still looking..at least they are honest...

just do it Mal...don't mention names if possible...

Random thinker.. yes you are spot on..its the same thing

I wouldn't be who I am if I hadn't gone through the stuff that has happened, some of it at my own hand. I don't like a lot of what has happened, but as I can't change it, I kind of like myself and how I've survived.

And I'll be bloody well naming names, but I am such a procrastinator that they'll all be dead by the time I've finished writing the book.