Todays a better day
...and as long as I don't play any old music I'll be okay I think. Sometimes I download an old song or two but I seldom listen to music these days. Music is like the smell of wood fire in winter for me, or a pair of eyes in the crowd. Its like real food for my soul and it opens up the heart to whatever is foremost inside. If its good stuff thats great, but when you are fragile, sometimes is just better to leave talkback on the radio, which is just about all I have on these days. I remember how my mum used to play the piano and listen to Elvis...but the neighbours would tell me they knew when she was down, because the piano was silent and they heard no music at all from her house.
Sometimes I just don't want to hear the news or pronouncements by Prime Ministers or Presidents. Sometimes I like to hear someone ring in and tell us all about his six brothers and how he loved his mother's Gramma Pie, and what it was like to come home from school and have it with cream straight from the dairy. I have to consider that there is as much importance as this one person's memories and there is in anything, any celebrity can declare on the front pages of every newspaper in the world. 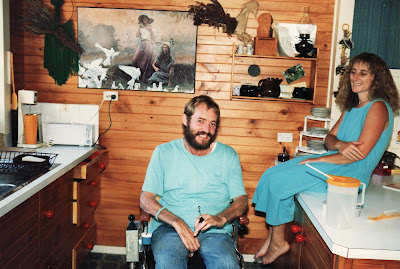 (Don and I in the mid 1980's. He loved having his photo taken, especially if it was a good lookin woman taking it... and this was taken by a women...thats why the "charmer-smile")

Alison said to me today, in a kind way "mum, we maybe will just have to accept that our family will never be the same again, how could it be? Which was just the right thing to say. 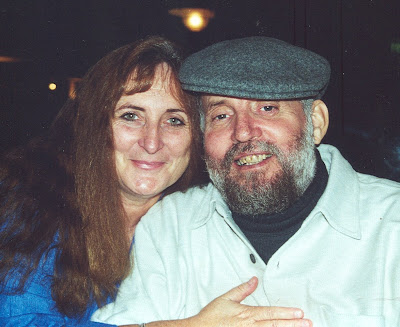 (years later, about 2003 - )
I think that when someone dies that you love, you think there is grief in the first few months, and it is devastating, but as time passes and reality really sets in, and you find yourself in total disbelief that you will not ever once see that person in this life again...the tears begin in reality. (thats okay)

Luckily I have not been called upon to lose my children...thats yet another sort of grief...every parent's dread...no matter how old the child... but with a husband and wife, a pair that have been lucky enough to find each other in the whole mix up of people on planet earth...the loss really is like that of the half of your heart you felt would always be with you...somewhere in our lives together we found the place of total trust and oneness...not in some droopy new age crapola, but as it has been since man and woman first loved.
Everywhere I go there are couples and families and people together. I never noticed this before. Its this which drives me home most days lately in tears. The loss is now becoming reality. There is an emptiness never knew in all my life before Don and I met. I was on my own then and happy to be independent and so called 'free". I realise plenty of people are just 'one" and now I see them and they see me. Thats okay, its all part of being alive.
I wonder how long it will be till I feel I can actually laugh and smile as I always did. I know that I was lucky as was Don in each other. Not easy in the years we were together as we fought like cats and dogs at times...but then we would touch and it would all be gone.
The hardest part is that my mind too often relives the brutalisation he was subjected to by some Royal North Shore Doctors and nurses. He was so fragile when he went there.

What I feel is different because of this. There is a dreadful guilt because I could not protect him. I couldn't save him, stop it. At that time I feel I would like to have fucking thwacked them in the face to wake them up...but I didn't, mores the pity. It wasn't till I got the notes that I knew the whole horror of what they had done and the fucking lies they told us...over and over. But this is okay by the authorities. I know exactly how the families of those murdered feel, until there is a publoc justice and acknowledgement of that crime.
This is what stinks the most. Such a frail man as Don can be murdered basically...call it what you will but I know he was killed, and did not just die - this is acceptable. Acceptable.
For many years Don and I used to get involved in fighting for social justice in our small town, we spent thousands fighting things that were wrong...I have folders of our many letters to the editor and authorities... hundreds of them...i, writing was easy for me but in his case each letter was painstalingly tapped out with a piece of wooden dowel strapped to a bit of velcor around his hand.
But when he is treated like a piece of garbage, and killed, no one body, no disability group, not one person who he had helped over the years put their hands up and said, "I'll help". Thats "society".
So as said, maybe the small stories on talkback, the individuals and their lives and hopes are more important than the big picture we are always being slammed and terrorised with.
This is my "bitter" day. I have just got the shits with it all.
Tomorrow I hope I feel differently. I am off to Melbourne to get my varicose veins fixed...I live in another state but I got in here quicker than the year I would have had to wait in Port Macquarie... I get to spend some time with my youngest, and I know this will help.

But... but...
I may have some good news soon...unsure...There is a chance I may be able to have a doggie in early February...to go with my cat Cous Cous. This dog is 6years old and a female half Kelpie/Blue Heeler. her name is Harley and her owner had to move into a unit. The funny thing is she really is a harlequin as a whole half of her face is Kelpie, (brown and tan) and 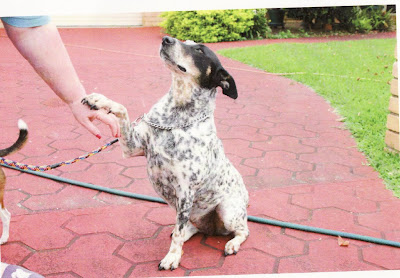 the other half is Blue Heeler (Blue Heelers were bred in Aberdeen NSW -my home town - no matter what those in Muswellbrook say). She has Blue Heeler colouring on the rest of her body and the legs to match... She is not as showingly handsome as the old dog Thorn, but looks don't matter, she has a nice look in her eyes.
I need a dog. The cat has helped but we aways had both.
Posted by Middle Child at 2:56 pm

Labels: a dose of the shits but with hope at the end

Music is so tied up with emotions and I can't listen to my favourites without going back in time and memories. Sometimes silence is golden.

You haven't given yourself enough time to grieve properly. You've written the book, bashed on Parliament doors and harrassed the bastards. Now there's a big hole in your life that you have to build a bridge across, one plank at a time.

Can you imagine what it must have been like in the cities and the countryside during the great war when so many husbands never came home? The widows never knew in some cases what had happened and never found out but you kept your man alive and happy even to the end.

There's nothing wrong in keeping him beside you, because I'm sure he's there.

Jahteh...I know this...and he is beside me...its just hard right now...like reality has set in. Very lucky to have so amny people who care i guess...thats a plus

Sounds trite I guess, don't know why, bit of an insult to them maybe, but yeah a dog will help, they are better companions than cats and try a lot harder to understand. Its true, cat's don't really give a shit. But dogs CARE.

Yes, yes the reality. I remember that part of my grieving. When a little baby dies it's a big deal to everyone for a month or so, then they all forget, and expect you to forget. How can you forget your own child?
I imagine that losing a partner who has been beside you for so many years would be a tough, hard and achingly lonely road. Especially in your case when you totally gave your all in caring for him 24/7 for so long.
I don't need to tell you that there is no time frame, no "set period" at which you will feel like you again. But I really believe it will happen. Someone with your spirit, with your passion and your wisdom has an important place in the world.
I just hope you have someone you can talk to, not just type to, but really talk.

You know MC, I was unable to have children--bad plumbing, and we didn't have the $$ to do invitro procedures...so here we are getting on in years and all alone. I know God will take 1 of soon and the other will be all alone. There are so many days that I feel so singled out because we do not have children. I don't fit in a t church with the women because it is all geared around being a mom; school is all about children and parents, even my taxes are higher because I don't have them...so I exist in a world with little tiny circle, a postage stamp of life of 2 Corgi's and an aging husband. Not much time is left really. The days of s--t do have days of roses sprinkled in-between, and I cherish them.

Si my dear friend, you have a kindred spirit thousands of miles away who prays for you each day--know this to be true, as I pray for you every day. Hoping we can actaully have a cup of coffee/tea together one day--meanwhile, hope you get a pup! Mine are my children. Hugs

Fingers' crossed for the puppeah :)

caroline....I think you have got to have both dogs and cats...sort of a balance thingie

Foxymoron...I have my duaghters and sisters via phone, but as you would know after a while you feel that people would really wish you would move on...its a quick fix world we live in.


CS...don't even think about the times to come...you lice in the now and you will never look back with regret...okay...just be like a kid and wake up without concerns at all...