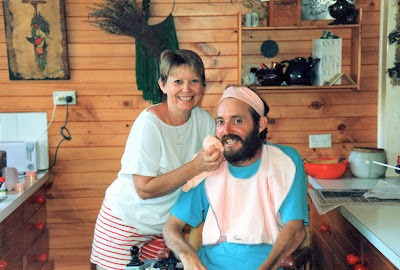 I just had to post this. This is Don and his second sister Judy..his first sister was killed in the late '60's...Judy was doing a "bewdy course" and Don being who he was easily volunteered to be her guinea pig...he loved this stuff


Judy sadly died from cancer in 1998 and Don and I spent the last 3 months of her life beside her as she died..I used to hear them talking softly on the long afternoons as she laid resting in bed. He would park his wheelchair beside her and rest alongside her. He loved her much and I learnt to love her the same. Many of his family had "charm" which those of us loving them feel privileged to have known..if this makes sense.


and as mentioned Don loved nothing as much as being in the hands of women...makeup, conversation, company. He was a relatively macho man at one time but had a soft side.... I believe that these two would be somewhere abouts each other right now.

If that man had been born a woman, he'd have been a right flirty tart. (said in a nice way)

Jahteh...he had the heart of a good time girl. You know, even as a quadriplegic and he'd be proud of this, he gave me more pleasure sexually than a man without any injury. I could never tell anyone because it was one of those no go areas...but he knew exactly what a woman needed before and after his injury and he always took the time needed to make sure things were okie dokie in that area. Too many women I know have not had that. I will be honest and say I moss the alomst 'adoration' he had of what it was like to be female...yethe was male in a big way...as disabled as he was. I have been terribly lucky...I know that hence the big hole in my heart.

he was a real hussy... I have so many pictures of him looking glamourous and anughty...the word naughty is on his headstone...

MC: sometimes I don't know what to say--I just take a deep breath when I read your words. My hearts pangs and my eyebrows purse together in sadness. You have a way of sharing life like no other--it simply pours out of you. You go places where most will not ever talk about--and I love you for this. Because you honestly share your pain, your love, your adventures, your grief, I have now know you for 4 years and gotten so close in many ways. I want to gather my box of old photos and have tea and crumpets on your porch. I want to take long walks on your farm and exchange the stories in person. So, here's to you, and your stories! I raise my cup to you friend--your family is so lucky and blessed to have you.

What a sweetie :D

They have the same aura surrounding them Therese, can you see it? What a very special two they were.

What a wonderful picture. Good memories are one of the best things in life. Glad you are doing better in this post.

MC- you took the lemons that life threw at you and made lemonaide. You cherished moments of your life that some of us took for granted. Your gratitude about what you have instead of what you don't have is truly AMAZING.....You enjoyed a kind of happieness that some of us will not know in our lifetimes. Even the rich and famous!!! Thank you for continuing to be an inspiration.

Awww, he had such a cheeky loving nature. What a good stick to take the makeup.

Oh Therese...I just love you and the way you express your feelings.....right up front good and bad. The doggie will be a wonderful thing!

what a wonderful relationship...

Your words really get to me, I can't even begin to understand how you must feel. I read and it alays hits home that this is similar to what my sister is going through, but she doesn't express so I can only imagaine her pain (she lost her husband very young)

Treasure those wonderful memories, you had a man in a million and I think you are a family in a million as well. Those girls of yours are special.

Jahteh He was a right flirty tart all the time, and i loved it...it was those eyes which knew no rules and that wonderful wicked way he had...thats what I loved whilst hoping he would be good "this time".

CS thanks for that... i am pretty commonplace and ordinary...but I see no reason not to share...we are all human beings on the same journey, no matter which path we all take

Caz I don't seem to see auras... but you could feel the conection between them and their love was wonderful... i got on really well with Don's sister which helped a lot...

Mom...I come and go...the days i wrote before were shocking...but now i feel okay...

Anon...you said it...I did enjoy a happiness that some will not know in a lifetime...and thats the hard part now...but i wouldn't have it any other way.

Jules we have too many photos of Don with makeup on or a wig or whatever someone wanted him to do...he loved it...

Rosemary I am looking forward to the doggie...soon.

Anne thank you so much...I do know how lucky I was, and am...its just hard to forget the bad stuff....and the loneliness