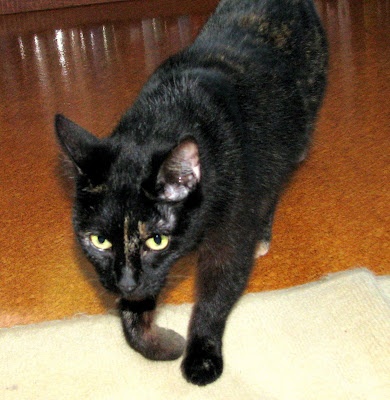 First photos of little Cous-Cous who i bought home on Tuesday. She was a little skittish in these photos, and seeing ghosties in all corners but has now settled a bit.

She has had a rough beginning being dumped with a full litter of kittens about 6 years ago. They were all found homes but she was to be put down.

Then an old couple saved her and cared for her> She is very quiet and gentle and so much like my old cat in nature, who died Feb 2007, that its uncanny.

The old lady developed dementia and her husband became ill so they went into a nursing home and as it is in our compassionate society even their little cat was stripped away from them.


Again she was on death row, till she was rescued by people who do this and made a special effort to find this little one a home.

Through a friend of a friend and here she is.


The house feels so different now there is another living being here. I was just too lonely after my dog Thorn died... 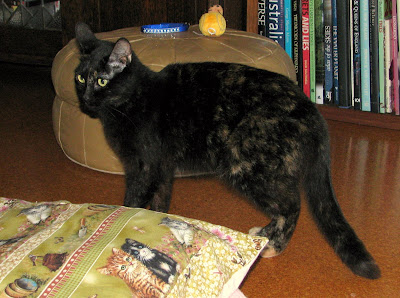 both of us needed each other. 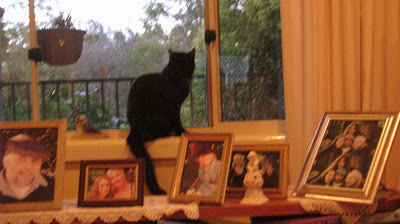 That's a good looking cat. Glad you've got some company for yourself now too. Yay!
Cyalayta
Mal :)

Yay to new friends! Hope she settles in quickly!

Cous-cous looks like a lovely cat and it seems given the lives you have both had over the last few, you were destined to be together.

She is beautiful Therese. I love her colouring. Every house should have a cat. It must feel good knowing you saved her from the unthinkable.
That photo of her looking out the window is gorgeous.
I am so glad you're not alone anymore.

I'm so happy that you have someone to keep company!
Especially so that cous-cous is getting a good life with someone that really cares. :)

That is the best Christmas present for you and puss.
I'm still feeding my little stranger of the night. He pretends not to see me and I pretend I'm not really feeding another cat.

She seems to be settling in, watching the birdies out the window and planning her strategy.

Hi MC--STILL here, just totally swamped in schoolwork...I will blog in about 2 weeks when I am on holiday...miss you too! HUGS
I love you kitty! I miss Thorn too. Good idea to get a new critter.

Awww, what a cutie! I'm glad you got another pet, MC. And I agree with FM, that photo of her in the window is adorable.

I'm glad you have some company, and very cute company as well:-)

Sounds like you and the new cat are good for one another. Every house feels better when a cat lives there.

Cous Cous, what a great name! Hopefully she'll regain some confidence once she realises she's landed on softly padded paws and then I'm sure she'll form a bond with you, that nothing will ever break. Its so important to have another little soul in the house to come home to and to hang out with.

Mals team gherkin...thanks for that... she's proving to be a better climber than I imagined her to be...

Janine...she has settled and now owns the place

Citymouse...i hope she doesn't try to eat snakes, most of them are much bigger than her and poisonous...

Jacqui...touchwood its all good luck for us both from here on it.

Sling - She is quite ensconsed and has already a favourite chair, and a circuit which includes knocking over vases filled with water in her marathon around the house...I don't know what she is chasing - ghost rats???

Foxymoron...she is just beautiful and right now a cat is all i can handle...a hope is not a home really without some living creature besude oneself...

Jahteh...thanks... so much subterfuge in feeding the stranger...but how could anyone sleep letting a creature go hungry?I never could


Random Thinker...she is now scouting outside actively...I need help in getting the bell around her neck please!!!

CS so good to hear from you. i thought you'd done a bunk!

Sara...and when she got down she knocked over some of the photos... but she is forgiven.

Caroline...thats so true...she is still a little flighty awaiting her old "owners" to return. I can pat her and sit with her but if I move too suddenly she's off...it takes time...

She definitely "belongs" with you. I can see it in her. She's a closet "ratbag" too.