A year tomorrow.
Its so hard to believe but tomorrow 17th will mark a whole year since Don was finally allowed to die by those monstrous people who abused him so dreadfully at Royal North Shore Hospital.

I have a sense of the rightness and achievability about things I am doing. I timed my petition to end on 17th. Gathering those petitions has been the hardest thing I have ever done and not said lightly. I would come home after wards and many times it took a while for my hands to stop shaking, although out on the streets I must have looked the picture of confidence and control. It was the loneliest time. Its done now and I am waiting for the petitions which many people took away to come back in the mail box.

I collected, just by talking well over a thousand names...almost each name meant going through the whole story which became more harrowing as time passed strangely. I placed in shops and gave to people who wanted to take some home quite a few and opened my mail box yesterday to see about 10 returns, which was wonderful...hope for more in the passing days. I am hoping to get close to 2,000...call me ol positive.

The most disappointing ones have been from so called friends and relatives, most of who had to be prodded along just to put their own names and post them back although my sister Joan managed 60 which is no mean feat. She just got a clipboard and went out on the streets and did it. But then she has been injured by the medical people who failed for years to diagnose advancing breast cancer.

Its funny, all the tears at Don's funeral more so once the booze flowed, and I remember wondering "where were you all in the years before when he was so ill and we were so isolated?" all his old "mates"... not to worry. That just how it is.

How I feel now is that I have two loving daughters and although it seems we have lost the cornerstone of out little family, we haven't really. We are united because of what we saw down through all the years of his Quadriplegia, good and bad, and because we knew what a wicked and funny person he really was... something outsiders never even considered. Apart from a couple of my sisters and one friend - hey I am fifty four and I have one solid friend... and I consider I am lucky with my little group of people...I know they are all real and solid. Not everybody can claim that.

I am trying not to think of the "this time last years"... but this time last year was the last day I got to sit with my lovely man, for moments in that pigsty of a hospital, in peace, in between all the flurries of activity and excitement which surrounded his vacating that precious bed. The only way they would release him by Air Ambulance to fly home to Port Macquarie was if I drove up ahead - and for some bizarre reason it had to be me, if I would arrive there and notify them I had arrived and all was ready. Then and only then would they release him. So instead of being allowed to be with him on that last long day as I should have been, even then they had no compassion.

So on the last day we sat in the house waiting and waiting... he was supposed to arrive before lunchtime. My youngest sister was with him at least. He had known her since she was 9 in 1972 and they had some healing to do over their last visit... so that was a good thing.

On that last day I was told he may not make it on the trip, that if he died on the plane they would keep going and deliver him...

It was the strangest day...Don and I were together almost 24 hours of the day seven days of the week for decades, and on this last day he arrived surrounded by officialdom and at the house there were people everywhere.

To this day Melissa and Alison and I wish we had had the will to tell them all to piss off, which they should have known to do... and we didn't seem to be able to act. I think that may have been shock really. I recall my face feeling prickly and numb.

Anyhow, Melissa arrived last night which is wonderful. I was dreading doing these few days alone. Alison who lives a very long way away in Melbourne had been quite sick again lately, so she will be with us in spirit. One of my sisters is coming from Brisbane...

Just sometimes it really hits me, and this is the same for those who have loved as we did/do... "How can he be dead?" Simple. I know he is dead but my mind can't imagine a world in which he is not somewhere... that (if I am lucky) I will most likely live the next 20-30 years without him.

Its not like I haven't lost close family... but nothing prepared me for the rawness of how I feel inside . I can only imagine a worse thing would be the death of a child and I don't want to even go there today..

Sorry folks...couldn't sleep just had to vent. I think I will spit at the next person who uses the words "healing process"... "closure"... "letting go"... Soft PC words to cover our modern inability to just grieve, raw and black, hopefully less and less as the years pass, as we humans have done for hundreds of thousands of years... 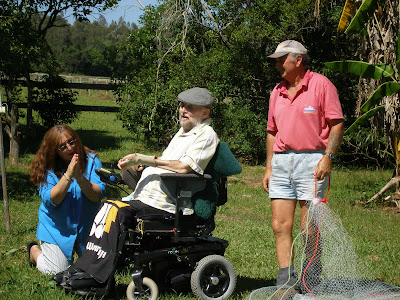 This photo was taken about 6 months before Royal North Shore Hospital brutalised him.

Don always had these "projects" going. This one was to cover the plum tree with bird netting and safe the plums for us to eat instead. It was a stinking hot day and I am actually pleading to be released from the slavery. Jim (friend) knows this will never be allowed. Anyhow we got a frame around the tree and after hours covered and anchored a bird net around it... and the plums were huge and dark and beautiful...those the fruit fly didn't get to first... when I see shots like this I can recall how "at home" and underneath "happy" I felt most of the time. When someone like him dies its as if the foundations of the world have been suddenly booted out from under you and you are left in an insubstantial place

Whenever I read your reminiscences of Don,they truly break my heart.
You write so poigniantly,and so lovingly.
I can't believe a whole year has passed.

Sling thanks...its been a long year and but for you guys I don't think I would have done as well as i have.

Team Gherkin thank you so much.