"T'is the last rose of summer, left blooming all alone"

Outside this afternoon its still 25 degrees but is well into Autumn and this rose has been catching my eye for a day...there are others but this one is just so beautiful. Don and I had a friend Alan, who died a year before Don did - and we had known him since 1975 - he stuck after Don's accident...I can re 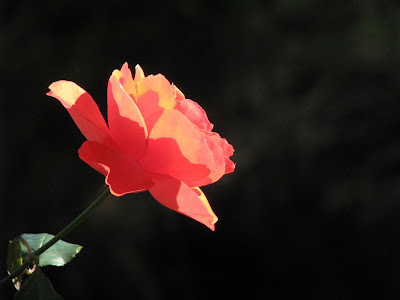 member him all those years ago with his blonde curly mop of hair, becoming upset over a dark red rose which had fallen apart...he was comparing it to how life is...we were so young then - He was an artist who earned his pennies by window dressing store windows and self declared in the days it was a little dangerous to declare that he was "as camp as a row of tents" - He was pretty keen on Don in the beginning but sadly had to be disappointed as Don was really straight - I knew why he liked Don to look at - the way he was made -who wouldn't? I was never jealous - even if there was any risk its not part of my make up - I liked him too and many is the time he came down on my side when Don was being a bit too blokey.
Towards the latter years they would talk for ages on the phone each abusing the other, but with no malice - the day Don found out Alan had just gone to sleep and died (maybe a stroke - we never found out) he rang me - I was visiting the girls in Sydney - and he cried and cried. We have many acquaintances in life, and some friends but for some of us there are only one or if lucky two truly good friends - people you would trust your soul to. Alan was this for us...and we could talk for hours on any subject known - history, religion - (or lack of), goings on etc - like Don Alan did not suffer fools gladly - and both having the same last name there was something of one in the other - but so different in many ways. We only have one photo of him and it was taken in the early eighties -but he never seemed to change apart from a few wrinkles.A perfect rose like this always brings Alan to mind. I know Alan would like to be remembered in this way and I think he would be surprised at the preciousness of that memory for me and I don't really know why apart from the fact he was such a good decent and funny person and a stayer...
""

Labels: The last rose of summer

Gorgeous photos of a hippie (not old though!) garden.
And lovely memories of your friend Alan.
Only one rose in our garden at the moment we cut them back hard but one bloomed anyway.
I can imagine Don and Alan up there debating something or other.

Isn't that amazing? But you know I believe in all that stuff.
I used to work for the display department (window dressing) in Myer city store in Sydney, I was secretary to the manager. One of the best, and most entertaining jobs I ever had. And some of the sweetest men I ever knew.