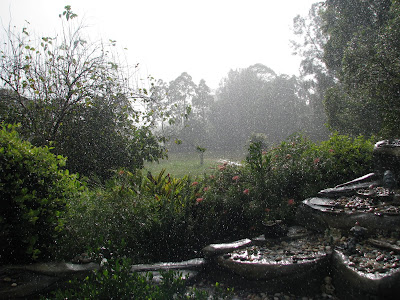 Its been raining much of the last week - but just for the moment the sun came out and it was just so amazingly beautiful out here. There was even a rainbow although we have rain predicted for the next few days - everything seems to be glistening with light. Sometimes when you get exactly the right angle the raindrops in the branches show all colours of the rainbow with such an intensity one could imagine all sorts of things - what amazes me is the beauty around us that most times we don 't notice till it comes up and smacks us fair in the chops like this morning - already as I type this the clouds have covered the sun and its dark again.

Here's a thought that has crossed my mind a few times in my life - The earth, the sky all of it can be just so achingly beautiful, the flowers, the hills, the ocean, people, even buildings - can take our breath away - the earth could have been monochrome, all bleak and colourless and mankind would still be able to live I guess - but what amazes me is why? Why is it so beautiful - It doesn't need to be beautiful, there is no reason why there is so much brilliant colour on birds wings, and flowers - all roses could be yellow, all dogs black - and it is the wild 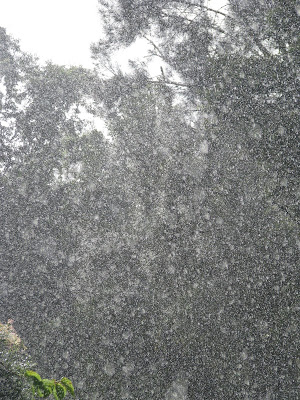 splashes of colour which our eyes and hearts seek - but its not really needed for the world to function - it'd be a much poorer world and life without all the beauty, less songs might be written, less paintings - even amongst human beings - why the variety of races and in those races why the individual differences caused of course by our DNA first and then all the things that happen to us between conception and death - but where did blue eyes come from - as they say we all came from Africa - from one tribe or race - where did all the differences in colour come from and in such a short time? And why? The colour, the difference and the beauty are needed for the human heart to soar but they are not needed for any apparent practical reason really.

A thought occurred and that is maybe all sentient beings see and appreciate the beauty around - but mankind has been allowed or developed the ability to express and record and therefore share these feelings so that I can read what Robbie Burns felt about his world so many years ago, and I can hold the thoughts that expressed not just the beauty but the ugliness; the joys and sadness of people some thousand years gone. I get a bit annoyed with people who are down on mankind as if we were an alien species here on this planet... we are as much a part of the beauty and life of this planet as any river or stream - and although there has been destruction by some - often in ignorance, but just as often with malice , just so there have been wonderful and amazing feats to match - and so the balance is more than struck.

On mornings like this its hard not to feel that although we are often hammered with all thats bad on this planet, there are many more good and beautiful things - its just that we don't 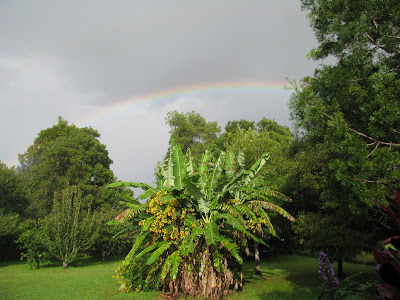 remember to take the moment to notice - just as on another morning I would have left the house barely noticing... just a thought train. 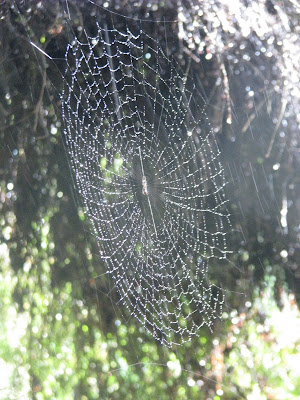 What beautiful observations and thoughts. Thank you for this.

Great post, and lovely photos as always.
I have often wondered at the colours of nature and all the amazing creatures and things that occur naturally.
And it's a beautiful day here in the Riverina, perfect Autumn morning.

The rain is certainly p... p... pelting down. Love the spider web.

Beauty is not in what you see around you, but in how you perceive what is there.

There is ALWAYS beauty.

I am with Andrew, that spider web is awesome!
I have to also say that whilst we were in Halls Gap, we looked up at the beautiful sun lit blue sky and behold, spider webs as far as the eye could see, floating, way way up in the sky... and what made them.. these tiny weeny little spiders. Drifting through the brilliant blue sky, I could not capture them on my camera, but gee, we are so lucky to witness such beauty.
Taking stock of everything around us, that is important to stay grounded and thankful.
xoxoxo

Beautiful thoughts and pictures! When we were coming home this week along the Hume Highway, I was amazed to see all the cobwebs sparkling in the early morning frost! You would never see them normally! I also see the beauty in most things, there is currently a small minor bird taking a bath in the gutter outside my house. It is so sweet! :-)

Breathtaking photos, it's wonderful to be able to take time and notice what is around us.

Caaaie, Karisma and Anne - thank you all - it really is a beautiful world we live in