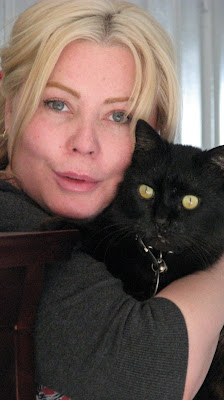 back from Melbourne and Sydney on Wednesday and had such a lovely time with the girls. Its hard to believe that Melissa will be in her mid 30's in a few days with Alison only three years behind. I always have such a good time at their respective places and I feel more comfortable in their homes than I do anywhere else apart from my home.

When I was down in Melbourne Alison talked me into having my right wrist re X rayed as it seemed to be getting worse rather than better. I fell on it in early march this year and the local X Ray showed no fracture...so after the initial swelling went down i made myself use it - an osteo and physio told me to get it mobile as soon as I could (based on the X ray.

Turns out that I have a fracture of the radius down at the wrist end. The doctor said not to use it to carry heavy things etc which I had been doing...and to wear a support when it was painful. The opposite of what i was told 5 months ago.

Our X Ray place up here is bloody hopeless...I remember all the botch ups they had when Don would have to go it...don't know if its old equipment or that they aren't careful enough.

I was beginning to have difficulty writing and doing buttons etc up and being my right hand it was becoming a nuisance. So thanks to Alison's pushing me it will heal in time as its too late now to put it in a cast or anything that should have been done 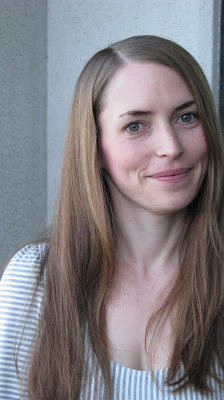 I left Melbourne before all the really wild weather but one day there the lake was whipped up so much that it had waves - From her high rise flat over Albert Park it was amazing to watch.

When I got back to Sydney Melissa was sick and vomiting and totally exhausted from it...so mum came at the right time. We spent some really close time together - I did with both of them.

I went to see the barrister who has gone through my book but the upshot of that I'll cover another day because he's still working on it.

Then the drive home from Sydney which I nearly didn't make because I started to get sick myself and found I could hardly stay awake on the drive. So I stopped often. Today is the first day I have felt even human and I am really washed out - so just blogging and catching up today and then I'm going to watch Parts 2 and3 of Gene Rodenberry's "Earth the Final conflict" has anyone seen that series...its addictive - although Sci Fi its as addictive as the Sopranos or Deadwood - made by HBO - I think th 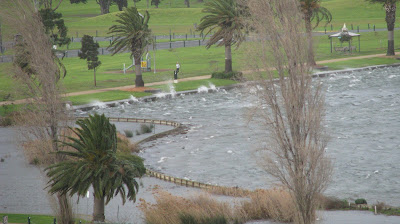 ey did the Rome Series as well.

I was pretty pleased to be home as usual but still can't get used to the idea that there is no one else here when I get home. There's plenty of people in that position and I am lucky that I have two of this earth's nicest people as my kids and some good sisters as well. I have one really solid lifelong (almost) good friend, two cats and you lot so life is really good especially compared to many other people.

I think I am just rambling now -

Glad you had some quality time with the girls, gosh Alison is like you to look at.

I do know what you mean about not having anyone to come home to, been there on more than one occasion in my life, but I know it's different for you since you lost that person who was always there for you.

And if they x ray has anything to do with PM hospital up there, I'm not suprised they botched it. I still think they're party responsible for my father's death. Grrr.

It's your blog and you can ramble as you choose.
Great photo of Surf,s Up On Albert Park Lake.
Great photo of daughter and cat too.
Catless daughter is also gorgeous.
You were very wise to stop frequently on your journey. Country highways are lethal.
I fell on my wrist (of course, and knee) 9 days ago and it still hurts. Big fat bloody labrador pulled me over when he threw his entire weight into sudden urge to get to an old bone on a wide nature strip. Anyhow, point is, I feel your pain and am glad mine was less.
Regional health service quality is reliant on doctors whose spouses will deign to live where the air is fresh.
Yes Prue and Trude I'm sneering at youse two.

It is great to read that you had such a great time with your girls Therese. Yet, it is not uncharacterisitc is it? Some girls would only wish they had such a bond with one or either of their parents.
I have adopted a mum for that very reason. She has been a wonderful friend since I was a teenager and we ride our bikes together and have wonderful laughing times.
Re your wrist: we often get patients presenting with problems like this. Some from local Melbourne and some from country ares too. The problem seems to be the clarity of the Xrays done. and another problem is the radiologist interpreting what they see correctly.
We often re Xray or re CT people just because their first films are not as clear as ours.
I am glad your daughter got you to go get a second xray. She is a good girl :)
I read your comment on my blog. You know, one of my High School friends began nursing with me and quit 3 months into it aswell. It wasn't for her right then and there.
So, after having 3 kids and then deciding what she ought to do, I sat with her and said, "You know you have it in you, and you are a Mum now too. Most of nursing IS common sense"..and it is true. Unfortunately, as you have witnessed, some nurses and even doctors do not posess even that!
Therese, Donn could not have had a better nurse than you..nor another person to be his lifelong soul mate. You, like me, do not want the praise for having been there, because it was meant to be..but lap this one up woman, coz you do deserve it...
"You rock Therese!" Huggs :)

Maybe I haven't been paying enough attention, but I have never seen the water in the lake splash up against the walls like that. Although, it has been a long time since it was full. Nice work.

A-maze-ing photo! That must have been incredibly windy that day!!!

Nice to see you back. Glad your daughter convinced you to go to the doctor. Take care of the hand. And thanks for the tip on the Gene Roddenberry series. I'll have to give that one a go.

I'm pleased to hear you had such a great time with the girls..They are lovely,as always.
Hope there is no permanant damage with the wrist thing Therese..Geez,..lucky thing you went a got another opinion.

Glad to see you back and on the mend. Apparently a wrist fracture can be quite easily missed on the first x-ray which is probably why over here they usually do a 2nd one a few days later. Alan had a similar thing with his foot a few years back and only a CT scan actually saw the extent of the fracture.

Welcome back. Glad you had such a lovely visit with your girls. Family can be such a wonderful blessing.

So, basically your wrist is out of commission.....all because someone doesn't know how to read an x-ray. Your daughter are so beautiful...I see Don in both of them....home is always where your heart is.

Foxymoron - Port Macquarie Hospital and some doctors are the reason Don ended up in RNSH and consequently died - they let him go with inadequate notes and wrong surgery plan which the dubbo docs at RNSH followed without checking...you are tight to say GRRRR

F G Marshall Stacks -"Prue and Trude" hahaha
The hardest thing to do anywhere in NSW is to find many doctors who speak and understand fluent english and everyone goes "oooahhh racism " when you state the bleeding obvious but its partially this which led to Don's death - along with filth...and attitude - I'll trade you one of my cats for your labrador... The cat that killed one of my three maggies which I was very fond of - she had three bells round her bloody throat as well

Cazzie - thanks for that. I have been feeling quite down lately which even in the circumstances is unlike me - maybe finally releasing all the tears I should have done earlier - or something. Its nice to hear it from you because you realise what is involved - but the truth is Don and I complemented each other totally - we finally got it right - were as one - which leaves one feeling only half - affecting confidence, everything.

Ali said she had never seen the lake do this and it was she who pointed it out...she looks at this from outside her window - lucky girl - I love Melbourne .

Mal - it was a very windy day and thank you for the welcome home. I have been enjoying your music - have you thought of busking at the local markets with your album for sale beside you as a way of selling. People often feel bucolic at markets and are in an expansive state of mind = just a thought.

Random Thinker - if you love Sci Fi you will be addicted to this series and it goes on forever I think there was about 5/6 seasons. I am up to season 3 and have to force myself to cook dinner or anything when its on.

Sling - I try not to do anything "medical" in my country health area - they get it wrong more often than right - I wait till I go to the city - but with a fall there is not much choice. Also because of the stink I raised around here after Don was killed I am not all that popular with the local medical people - I almost hyperventilate when I have to go to a surgery.

Jacqui - Our local X ray people have a bad reputation for unclear X rays etc - its a known. I should have done something sooner but thought I was being a sook.

Mom and Sara thank you for the welcome back...good to hear from you.

Rosemary - Its noe actually out of action - I use it but with a support wrist thingie in it. I have trouble doing certain movements like combing hair and doing up bra straps - can write but it hurts...the doc said it would have been better by now had it been treated at the time...