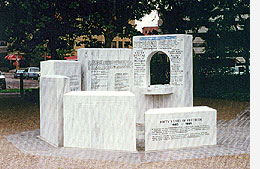 A mysterious and learned [ ; ) ] friend sent this to us...
"I thought the meaning of the 33 foot sculpture (pictured below) recently erected at Grand Rapids - the home of the world's first mass fluoridation experiment - by the West Michigan Dental Association, was quite clear.
Regards Dennis Stevenson
Firstly, at the right of the picture is a patient. That they are a dental patient is obvious from their mouth being wide open. As their tongue is all the way out, obviously they are screaming. We'll get to why they are screaming in a moment. Gathered around the patient are 5 dentists. Equally obviously, as there are five dentists and not just one, it must be a training session, as only one dentist is required to extract whatever money a patient might have.
The two dentists on the left can be seen to be senior to the other three, as is clearly shown by their height. The tallest dentist is the lead instructor and his colleague, on his immediate right, is the 'watchdog'. I'm sure all of us are aware that when a dentist speaks at a public meeting, there has to be another ADA approved dentist in the audience to report on what the first dentist says.?Naturally the same requirement exists when dentists are being trained. Though it is almost preposterous to consider that any ADA approved dentist would tell the truth (remember what happened to Mel Gibson in the movie Conspiracy Theory) the ADA is ever vigilant to ensure that no dentist should mention, even accidently, that fluoridation is anything but "absolutely safe and effective". Though it seems silly and is extremely unlikely to occur, imagine the repercussions if a dentist told students that fluorosis was chronic fluoride poisoning of the 'whole body' and not just a 'minor cosmetic effect' on teeth only?
Which leads us into exactly what the trainee-dentists were learning at the time the picture was taken. This is revealed by the attitude of the students. You will note their proximity to the patient: this shows that the 'cosmetic effect' of dental fluorosis is being discussed and specifically, the vast fees that can be made from gluing white plastic covers over the fluorosis disfigured teeth of patients - at $600 to $1,200 per tooth. This is, of course, why the patient is screaming.?
However, you can imagine why the trainees are so excited. Not only have they just learned how much they can charge patients, but they have also discovered that fluorosis, or 'egg-shell white' mottling as they prefer to call it, is a never-ending source of money, provided they keep promoting fluoridation, as this is what causes the mottling. Now they realise how they can easily pay cash for a new premier Mercedes every year, not to mention the endless golf and wonderful conferences sponsored and paid for by Mars Bars Pty. Ltd.
You will also notice at the bottom left side of the picture, almost hidden behind trees, is what can just be seen of a car window. The window, exactly positioned so that it has a clear view of the meeting through the trees, looks black. However, expanded digital film analysis reveals that state of the art video equipment is recording everything that is being done at the meeting. This is another requirement of Sigma-Delta-Sigma, the secret society of dentists, which dentists are on a blood oath never to mention. You may recall the deputy President of the NZ Dental Association who accidentally acknowledgedly that the society exists before he realized his error and stumbled out with "My membership of any organisation has got nothing to do with your interview." Have you ever seen him again?
Something to also be seen in the photograph is the golden path. Because of poor reflection, this shows in the photograph as a white section on which the dentists are standing. This is always there when dentists are being trained to ever remind them of the dental brotherhood and the riches that await them if they obey the 5 Golden Rules.
You will notice one of the dentists, the smallest and most junior one, has the 5 Golden Rules written on his back. Enlarged, they read:
1. I promise to always pretend I and brother dentists are doctors though we are not medically qualified and do not have doctorates.
2. I promise to protect any brother dentist who kills a patient with mercury or a topical fluoride treatment.
3. I promise to?charge every patient extras for: cleaning, topical fluoride treatment and x-rays and to never reduce fees or disclose to outsiders how many hundreds of thousands of dollars I make annually.

4. I promise never to publicly debate fluoridation but only to forever repeat the dental mantra "Fluoridation is absolutely safe and effective". I will always vehemently deny that fluoride is a rat poison.

5. I promise to follow the 50 year old published advice from the American Dental Association to always denigrate and ridicule those who speak against fluoridation, no matter how well qualified they are.

Hopefully this brought a smile to your lips...it did to ours but we are too easily amused.

Hi MC
I used to be in the dental field for 15 years before going into teaching and I can tell you that this post is exactly true...people up here don't understand that fluoride was originally intended for rat poisoning.
It has been a nagging little cover-up that possibly explains why the huge increase in autism and other congenital disabilities are caused by flouridation....??? Americans are bombarded with chemiclas everyday to the point our immune sytems are exhausted and we have no way to protect ourselves really. We stopped using fluoride awhile back and even went to putting on a water purifier for our home. The gov. wants to fluoridate all the water systems up here.

I used to hear dentists say how wonderful it is...but they never put the poison in their mouths!
Nasty nasty stuff that has far reaching consequences beyond enamel protection. Good post MC...hope more Americans stop using ut. It's hard to find toothpaste without it up here. Only health food stores have it.

4 out of 5 dentists reccommend flouride!
Thanx CS for being the outspoken "5th" ;)..
funny stuff middlechild..

No good trying to save-my-teeth-from-falling-out-bastards. ;)

Oh well at least we are safe in the knowledge they will be able to afford their Germanic automobiles. :0(

I am very suspicious when Government wants to 'protect' any of us from anything. There must be money in it for someone somewhere.
I am very suspicious of The Fluoride Debate.
Who sells it?
What does it cost?
Why do dentists want to put themselves out of business.
I too smell that rat you mentioned CS.