This is a photo of my lovely dad... taken about 4. It was the only photo taken till he was about 21. My sister Joanie scribbled on it when she was about 4 also $#**^#$# bloody kid. 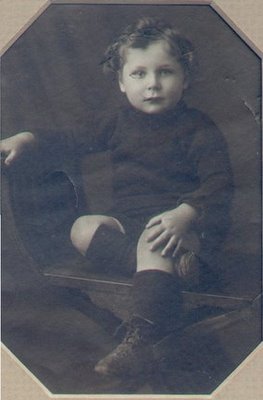 He wore his socks well folded back to cover the callipers he wore till he went to school...a congenital condition which is still evident in some.

The shoes were well worn, too well worn. and the one tucked under shows this in its sole. I remember him telling me that when he was inprimary school, in the 1920's he was caned because he didn't have shoes...so after that he had a pair but only wore them at school and put them on just before classes. Bloody bastard school teachers.
His dad, my Grandfather, also had a foot deformity, left untreated in those days. He organised cricket teams for the kids in the small country town and carved wooden toys for them when he was ill.

He contracted the Flu in 1919 and although unlike others he survuved he was never well enough to work full time after that.

I look at this picutre of my dad and I know what he went through...being given a bloody white feather during World War 2 bcause he was young and apparently fit...but knocked back by the army because he couldn't march, because he limped...but he drove ammunitions trucks etc etc... still the white feathers hurt raw...I know this.

He met nd married my mum, herself a bit of a lost soul and wonder of wonders they had a alove story...I remember them all frisky and giggly in the kitcken when I was a kid... a lovely thing for a kid to know... that the parents are actually "in love",

so that when he was hit by a drunk driver and killed...mum just evaporated...collapsed internally.

So sad. I need to write their story properly one day. I have a repositry of 150 letters he wrote to her between 1946 and 1949 when they married...its a treasure trove. I don;t have her replies as his mum burnt them...you know the old Catholic proddie thing...she was Cof E and a strong masonic tradition in the family...and Mum was Irish catholic...full of music and whimsey and something other.

It's amazing how historical injustices can affect the generations that follow!

Only know is our government giving the WW1 soldiers that were shot at dawn for cowardice a pardon.

It was not cowardice... they were suffering form shell-shock as we all know and it has taken to long for this injustice to be put right! At least is is being put right now better late than never

Triumph and tragedy in every generation, MC, but love conquers all, with luck.