Letter to local company explaining why we will not be paying you $75 for nothing - names changed of course to protect us from this bastard. Bits in bold are what I would liked to have added... to that long tall streak of misery weasel's letter...but am tooo tooo much of a lady to do so.

Dear BASTARD, BASTARD, BASTARDY,
On the weekend 2nd July we rang you because the Blower alarm on the Econocycle waste water system went off. (thats our grey and sewage water plant for you urbanites!)

You came round that day (Sunday) which we remembered because it was just before Don's birthday.

You assessed the problem and took the Blower away to be fixed.

About the middle of that week 4/5th July you came around and attached your Blower a different type, which was just to hold our system till the part needed arrived. You used a bit of our garden hose to attach it to the system.

When we hadn’t heard from you we rang you about 12/13th July and asked had you ordered the part. You said you had. We asked for the name of the company, which you would not provide. So we let things go. (WHY?)

We did not contact you nor did you contact us till Monday 24th July. We asked where was the part. You said it was coming. We asked again for the name of the company and again you would not provide it.

All during this time the alarm was sounding about every 24hrs and we would just mute it. This could not have been very good for the system. (which is worth thousands and new!!!)

We then decided to contact the company itself, Econocycle.. They said that you had not ordered that part for us. (AMAZEMENT!) We told them how long it had been and they were quite happy for us to order from them under these circumstances.

They asked us to get certain numbers from inside the Blower box. When we (me... with Don directing me into the cesspit lovingly - disability has some pluses don't it?) went outside to do this, and took off the 3 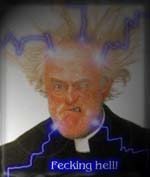 remaining screws (where did you put the other one?) the Blower was detached from the garden hose and right up against the side of the outside casing. A small black tube was also detached. (God knows what it was supposed to be doing)

We rang Econocycle back and they told us that you had just rung them to order the part. That part we ordered on that Monday arrived on the Thursday. Three days in transit.

We then spoke to you and told you about your Blower being adrift. You said you’d come out and sort it out and we said not to bother because we would not be paying you.

You came out anyway and put two clamps on the hose and reattached the little black tube. Then you said you’d be away for a couple of days and went.

The very next day Thursday 27th the Water alarm went off. (This is a major drama because if not fixed quickly toilet and grey water comes back into the house and toilet...MMMM yummy!). We called Garden Master in Taree, and they came out that day. They reported to us that a power cord was totally detached inside the box and that the filters on both lines were blocked. (They were at a loss to know why that cord could have so completely detached itself and fallen right our and away...but we have our suspicions!)

Early this week we asked you back for our Blower which you took away to be fixed early July. You said that before you bought it back you wanted to be paid $75 for your time, picking up the blower and installing your blower which was not attached securely to our system. (Tee hee)

We said we would not pay you because we’d had to contact Garden Master to re do the work, which you should have done in the first place, which may have caused more damage.

What we cannot understand is why you did not order that part in early July and that twice when we asked you, you said that you had ordered that part. (Que?? don't you like us :((

It is not unreasonable of us to have expected you to have fixed the Blower within a two week period, but almost a whole month had passed and you still had not ordered the part, much less fixed the Blower, and only ordered it once we said we would be contacting Econocycle.

We are happy to exchange your blower for ours and call it quits as we are more out of pocket than we needed to be due to your inaction. Please phone before coming out to pick up your part. We will have it ready for you when you do.
Yours sincerely,Don and Therese Mackay
PartII due soon... no doubt
Posted by Middle Child at 3:42 pm