Its Mum's Birthday!
She would have been 84 today. She died suddenly (Cardiomyopathy) in 1993 at only 66. Her photo and candle will be up there today. She actually died on Don's birthday July 4th but we didn't find out for two days. She was minding my eldest sister's house while they were away - and called me on that evening - but as it was past 10pm when I got home I decided to ring her early in the morning - when there was no answer I was worried but also knew she had an early appointment and most likely had already left. But when phone calls continued to be unanswered by her, my younger sister and I became frantic - so we called the police. She was way up in Brisbane so they could get there quicker than us. The next thing a paddy wagon came down the driveway and I knew she was dead before they told me. I had always thought I would be with her when she died as she lived near me. I knew she was on borrowed time as her condition was end stage - but for years it haunted me that she lay there all that time. But I know she is okay because I have had vivid dreams of her dancing in circles in a bright emerald green dress which flares out as she twirls around - young and beautiful. Mum loved music and to dance. For a time the scent of her soap (Sunlight soap would waft around my head and I never used that soap). I have had a similar dream about Don in which he is young and healthy and lying on a rock near a waterfall we went to once - and he is glowing as she was glowing - the colours again are bright. He has tapped me on the head more than once when I was really sad...and when i almost went to sleep driving I heard his voice loud in my head. "Wake up!" and i did and realised I was in a dangerous state on the road. So I know no one really dies - not forever. And so a bright big happy birthday to my lovely mother who was always kind and tolerant of a child like i who may have tested her patience - a mother who laughed a lot - who possessed a class and gentility that no training nor money can buy - to a mother who let me become the person I had inside me and never, not once was critical of my dreams and achievements - Mum's take on a visit was "It was such a lovely visit, we had some really good talks." I wish I could have done more for her, and understood more, but I was young - as she was young when  her last parent died and she no doubt would have had the same thoughts and like me apart from mentioning them did not dwell on them. I was so lucky in life's stakes to have had parents and a husband and children who are all much the same and possessing the same qualities. I think the words I am looking for are "They have understanding hearts." And if you have an understanding heart you will know what it means. 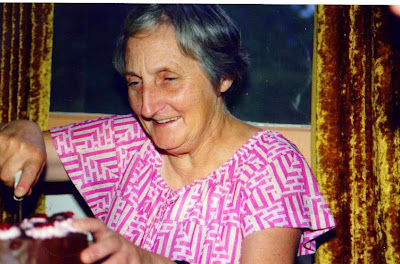 Mum on her last birthday in our old home. 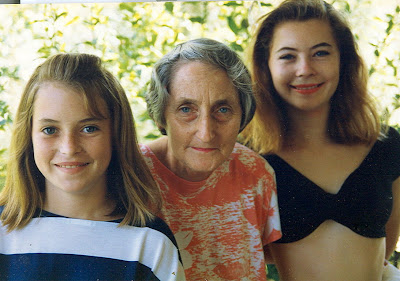 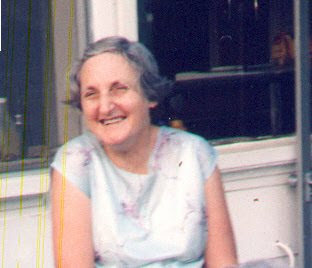 Mum as she often was

Memories are precious and wonderful. I'm sure she and Don are both looking out for you every day.
Happy birthday to your mum.

What a lovely post and tribute to your dear mother. Your mum is exactly ten days younger than mine.
Reading about those dreams gave me goosebumps and a tear when I read about your mum dancing in the emerald dress. They do visit us and they do help us of that I am sure.

Would you have thought that my Mum will be 81 next week, after all that we've been through for the last 4 years. I have told her though when she goes, she goes and no looking over my shoulder for the rest of my life. She's always been afraid of never finding my father again but I can tell you he is near her every day, waiting.

Such a lovely post. This made me sit and think back to my mum and my memories of her. My mum was a couple of years older than yours.

In the photos your mum has a real sparkle in her eyes. A precious photo of her with your girls.

How very cruel for you to deal with the circumstances of her death, but it appears she went quickly, and I am sure she certainly knew how loved she was (hugs). I also think she would be very proud of the daughter she raised.