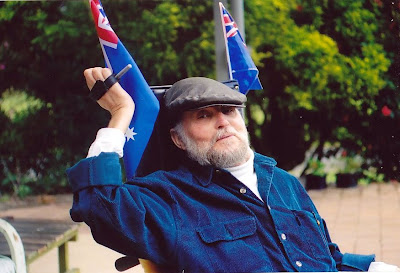 4 when after out writing group reading out our stories on ABC radio one of the husbands made the comment that the Poms in the group read better than we Australians -
Well when i told Don, he said"Are you going to take that!!" and no I wasn't - so here for our national day is my defense of how we speak - some things will only make sense to Australians above a certain age -and Bunnings are the only place i could find Australian flags that are not made in China - I am not a big flag waver but I still have Don's old flags and the ones he bought all were made in Australia -
The Verdict

The verdict is now in; we can all do our sums,

From Yorkshire and Scotland, or from London slums,

Their rich and well-paced pronunciation

We stand in awe and absolute adulation,

With wailing and gnashing of teeth for

No matter how correctly they give us their instruction,

The best readers in our group appear to be Poms.

Not like us, us low bred; bred from convict scum,

From a motley lot who don’t know where we came from.

Drawling slow and dreary - as bleak as a hot Sunday afternoon,

Under brazen open skies our narrowed lips and eyes,

Droning flat our vowels - flat as the land of our birth,

So as not to take up someone else’s time –

we’re an unselfish lot we are, that way.

Nah! We’ll never read as good as any Pom.

But stone the crows and starve the lizards,

we’ve got colour in our language.

It sears with sarcasm, hot as tar in February

And a flick of a word from a closed mouth can wound or praise,

Even though you might have to ask for it to be repeated.

Yes, and we’ve learned from the Master - Paul,

from Bankstown, that a soufflé rising twice

has nothing at all to do with cooking. Thank you Paul.

But nah! We’ll never read as good as any Pom.

Even “Blind Freddie could see that Poms all read so well

And so what if they “have more hide than Jessie”,

and don’t know “whether they’re Arthur or Martha”.

So what if they’ve got “more front than Myers”

And are well known to be shy of water,

But we’re such happy little “Vegemites’

(Or should I call us Dickie Mites, now they’ve sold our National icon,)

We’ll let them read on radio, with their peculiar pacing pronunciations

All sounding vaguely like Judy Dench, God love her -

That’s the sort of people that we are,

But nah! Still, we’ll never read as good as any Pom.

Who wants to sound like a pom anyway? Not me!
Happy Orstraylya Day.

Nice. But you spelt Austraya wrong I think. No 'i'.

Haha, you are such an awesome person Therese,,, very well written :)
Also, I have been going over your new improved site.. it is amazing and you just don't know how proud of you I am for sticking to your guns and not letting the bastards win!
Cazzie

Austraya! you're standing in it.
X X

Haaaaaaaaaaaaaaa, you're a riot, Therese, this is tooooo funny! What the (bleep) do you mean, we are shy of water??? Bloomin' cheek! (Giggle)

Shrinky - its a well known fact!!! ;) Sort of like the myth that all Australians except the "ten pound Poms" descend from Convicts!