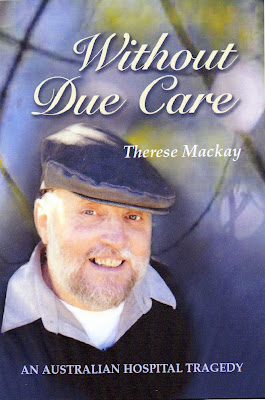 e word "by" in front of my name. The back cover is excellent but not finalised the words yet...but getting there - its been a long haul and some of you know just how long and it has changed drastidally from what i first wrote which some of you received...but it got better everytime I re edited it... The foreword and back cover was written by the founder of the medical error Action group who's name I will leave out until closer to publshing time but what she wrote is excellent,


"Medical negligence is a subject no one wants to talk about until it happens to them.

It is made all the worse for affected families because Australia's health system is saturated in cover-ups; a system so ruthless it does not matter if trusting patients end up dead.

When our loved ones die from their medical treatment, it is human nature to want an all encompassing explanation on what went wrong. The duty to our loved ones kicks in and drives us. We expect statutory authorities to act.

Therese Mackay, in demanding answers to 'what went wrong' with her late husband Don's treatment and care in a Sydney public hospital that led to his untimely and unnecessary death, was not only blocked by people with greater resources but also not helped by those people whose help she needed because of their institutionalized indifference.

No bereaved family with iatrogenesis the cause of death should have to steer the investigation to find the truth. The Mackay family so did. But those people in power who failed to exercise their statutory duty and do what is right did not consider that the Mackay family's efforts in wanting justice for Don would help others encountering the same tragedy when their loved ones too die from medical negligence.

The New South Wales health system let Don Mackay down. His family did not.

This is an account of a loving family's plight and fight for justice for the late Donald William Mackay 1950-2007."

Be proud of what you have done for your Don. You fought hard for justice for him.

Brilliant, I am so proud of you and your girls for having persisted together to this end.. yet it is not the end, it is the start of something new. Letting the World know of the injustice done... if it were to prevent anyone else having to endure this... just imagine!
Huggs to you and the girls.

You never gave up Therese, I am in awe of you. I believe that with this book, you have truly made a difference. Thank God for the human terriers in this world.

I love the cover.
your persistence in getting Don's story told is inspirational

Oh Sweetie, there is whole host of things I have yet to discover about you, isn't there? Wow, this is amazing. I am so sorry for your dreadful loss, and completely awed at how you've chosen to deal with it. You rock, girl!

WOW....powerful words there. Therese you are amazing, steadfast and have such integrity.

All that hard work has paid off and I don't think they would dare sue you, the outcry would be heard around the land especially if one of the current affairs shows got wind of it.
Congrats, Therese.

THEY might sue YOU?..
How much gall would that take?
That's a beautiful cover Therese..
We're all so very proud of you,as I know Don would be. :)

Wow, congratulations on your hard work and devotion to justice paying off.

Sling - they have the gall! have no doubt about that - its all about reputation and most importantly money - I just have to hope for the best