A celebratory drink was had last night!!!
and none the worse for the wear. 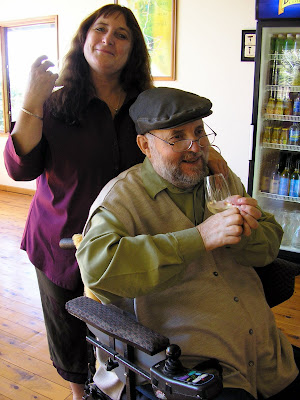 This photo needed here.(Don and I 2004 at a local winery)
On Monday it will be three full years since the day we bought Don home from hospital, the day he died. Since then I have worked on exposing the horrific things that were done to him inside the hospital, negligence which led to his five weeks of desperate suffering and then death. Part of this was to write a manuscript and meticulously record as much as I could find out and witnessed that caused him to go through so much unnecessary pain... it was wrung out of me. Many tears.
Yesterday I had a phone call from a longtime friend who had handed my manuscript to a printing/publishing company. Up until now after approaching 28 publishers and others who just print the book anyone who was interested was not prepared to take the chance because it was critical of the medical staff involved.
The people she took my manuscript to are interested and would like to see it published before the elections later this year. They said it was powerful.
I feel as if a huge weight has been lifted from my shoulders as I was almost at the end of what i could do to have it published.
Over the past three years I have given the medical people involved and the bureaucrats every opportunity to do the right thing and acknowledge what they did and what they covered up. Now I want to expose them. Not one more person should be put through what don was and what our family has had to deal with then and now and no doubt for many years to come.
Instead of my seeing Don's face as it was in the hospital, as I went to sleep last night, the face I had behind my eyes in the darkness had the biggest grin...and the timing is just incredible.
Also on Monday I sign a form with the lawyers to have the issue taken to the Supreme Court in the hope of having a Writ ordered to force a full Inquest into Don's death. Again... Monday 17th Don's anniversary...I had been waiting for a while to get this paperwork and it arrived on Friday - but the signing will be on Monday...
So I celebrated last night with three boiled eggs and toast ( a bit lax in the cooking dept at times these days) and three good (Big)sized glasses of my favourite De Bertolli's Cardonaay (from the cask)...and could hardly concentrate on anything else at all...slept like a baby and woke up still smiling...No doubt I was not alone in my celebrations as the girls were so happy for me, and have the same need to have people know what happened as it is not something you can tell people in a few words. I think it will help them as much as it will help me, and I know Don would want us to do this because he was always a crusader for the rights of others himself.
And I took time to toast the Angels and Don because I definitely have had help... part of this poem says it all as far as I am concerned

But oars alone can ne'er prevail
To reach the distant coast;
The breath of Heaven must swell the sail,
Or all the toil is lost."

Labels: the book will be published

Woo Hoo! It is going to be published. What wonderful news!

Incredible timing indeed. Great news Therese, and I'll be thinking of you on the anniversary which will no doubt be so bittersweet for you this year.
I'll have a cardonnay for you and Don this evening.

"Not one more person should be put through what don was and what our family has had to deal with then and now and no doubt for many years to come."
Exactly! Therese, I am your number one supporter... and that is under your two precious girls of course!

God bless you and your strength.

You are one heck of a strong woman. good work and patience with the book publishing.

I can't believe it's been three years, but I'm also impressed with how quickly you put together that manuscript and it's about time it gets published.

Miss O'Dyne and I are thinking of you today. I'm commenting for her in case her computer baby crashes again.
We went through it all with you and we'll be here to the end. If you need us, just whistle.

love and support from me too

Looks like all that hard work is about to pay off!
I admire your perseverence Therese.

Thanks for all your encouragement - have been all over the shop after a phone call from a solicitor who begged me not to publish (he had nothing to gain financially) so am going through it yet again to remove all place names of hospitals and ensure I remove all doctors" names - not interested in blame of the individuals - they would not be allowed to exist if the system did not encourage bad medicine and cover up...

Congratulations on getting published. I expect that your book will help open so many eyes.

You so deserve to get that story published!! I admire your strength and the fact this was no way you were giving up on this.