My cat Cuss Cuss now has a housemate 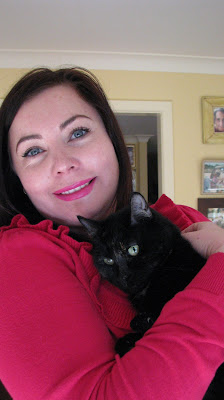 ...courtesy of my eldest Melissa. Both cats were dumped or became lost but little Cuss (top photo)is quite a bit put out by the new intruder , and aged six has no time for the new kid on the block... who is like a big kid. There are many hissing sounds around the house, and cats sitting back to back but watching every five seconds...any one have any magical way to get these two cats to at least tolerate each other.

Both are female...being dumped with a full litter some years back made Cuss very insecure...she is a quiet little cat and I hate to see her unable to relax ...

I separate them at night time..and am hopeful...but some cats are solitary animals and some are not...they are very similar but the new one (imaginatively called Tiger because she has very long legs and her body is like a tiger ) is having trouble getting the message not to get too close to Cuss... 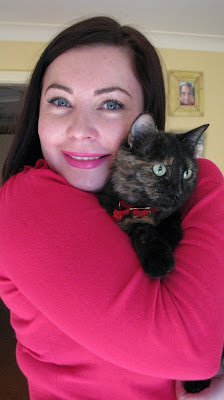 There are some cat people out there...what do you do to help them a little...its quite "frantic" the way they are?

I think they shouldn't be separated, but make sure the non aggressive one has a refuge such as something she can jump up on or get under and be safe from attack.

That is a tough one Therese, and you are right, just like humans, some cats like to be alone. We used to breed Siamese cats, and I know that they are the toughest personality out there!
Yet, just as Andrew said, giving a safe place for the meeker one is a good idea, and well, cats sure do know how to find a place to hide :)
Gorgeous pics of the cats with your daughter btw.

What a beautiful cat (and daughter!!)

I think they'll be fine, they just need to work out their own relationship. Nigel wasn't as old as Cuss Cuss when we got Lily but he was put out at first. He wouldn't even talk to us, would just stalk past us without looking and go out the cat flap, it was so funny. Then they became best of friends. Time will sort it out I really believe that.

My 2 cats barely tolerate each other, even after being together for 5 yrs!. Skara was only 4 wks old when we rescued her from someone who was going to shot the whole litter. However, since the house is near enough empty now with kids leaving home, we have noticed that they are now playing hunt and catch together in the evenings but only as long as they think we are looking. As soon as we notice they retreat to their respective places in life.

Good luck with the endeavor. I think basically as long as both cats think of you as the dominant one, they will get there.

I separated the kittens from the adult cats for over 2 months and it made no difference. Sophia hated them behind a gate or out in the house. Sophia is gone now, but Mimi hates them in her place. As long as each cat gets time with you and has a place to call their own, it will be what it will be. Just watch them for spraying...and yup, females do it as badly as males. Your daughter is lovely.....as are the cats.

I'm of the opinion you throw them in a boat together and set them adrift. Feed them next to each other, drag some yarn around in front of them when they are together. They may not grow to love, or even like, each other but my experience is they usually end up tolerating each other because they have no choice.

Get a dog therese!..The cats will form an instant alliance against it. ;)

Thank you all for your good advice...I think Sling could be a politician...his tactic of "the enemy of my enemy is my friend" sounds well thought out... Right now its cautious toleration and curiousity with a hissy fit every so often...then they turn thei backs on each other...has been fun to watch...

I'm sure given time they will begin to learn to ignore each other - good luck!!!