I was just handed these two photos of Don and I taken back in 1986 - He was 36 and I was 32 - I have similar photos but not these ones. My heart nearly broke when I looked at the way he was with the doggie and the doggie is so at peace on his lap - he was such a kind man.
And the photo taken in our old house is so much how it was... we were quite young but had accepted things and got on with being a family - Don never showed me any bitterness about his lot in life...he was alive and we had him and thats all that mattered. he could just as easily been killed back in 1982 when he had his accident and the girls would not have remembered their dad - and would have been hugely the worse for it...my life would have been so different and so much less than it has been - and I am eternally grateful for this. 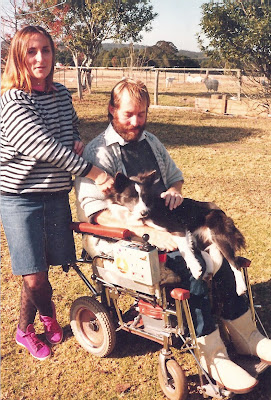 Labels: when we wre younger

Love those stockings and pink sneakers!
Was that shot at the table a special occasion? That one is a lovely photo of the two of you.

Yes - what a racy dresser!!! The bottom photo was taken in winter and I would assume that it was for Don's birthday 4th July as we only put the cloth and candle out for special occasions

I see your daughter;s smiling face in the second picture.

I just love the second photo. Well I love both of them, but the second one captures s very special moment.

I was beaten to it, but love the pink sandshoes, you rebel you.

Lady Gaga with the pink shoes not to forget those racy lace stockings.

Thanks mom - I was about her age there as well...

Andrew - what was I thinking???

Jahteh - I was never known for my grace and elegance

Wow! That top pic, the doggie, he looks just like my dog "Mate" who I loved and cared for in my teens. He was so faithful floowing me on my horse everywhere. I still miss him now. Such a big part of our lives are pets.
You must be so happy you got these images given to you. Look at the love in them both. And, the love and relaxation in the second pic, beautiful people :)

Thanks for that Cazzie - Don had a real soft spot for dogs and horses and birds...